I’m running a few weeks behind with my posts as I’m now 31 weeks along and in the third trimester, but better late than never!

Or alternative title: “All my shirts are belly shirts now”

I’m happy to say that everything is progressing well with the baby and I!  The second trimester has been an improvement from the first, in that the all-day/all-night nausea finally quieted down.

Pregnancy in general has definitely been different than what I anticipated, but of course I’m very glad to be growing a baby.  The coolest part by far is getting to feel the baby kick!  I have felt lots of hiccups which make me smile.  Dana has felt the baby move too, but otherwise baby has been elusive when it comes to sharing with other family members.

My biggest struggle lately has been lack of sleep.  I wake up for the usual pregnant lady pee in the middle of the night and then never fall asleep again (or so it feels).  Compounding this issue has been the sciatic pain that has flared up lately, which makes sleeping/sitting/walking uncomfortable as my pelvis/low back are so sore.

My crossfit wods continue (with many modifications of course)!  I have given up running any sort of distance though as my bladder can’t handle the pounding.  I’m glad Seawheeze fell when it did (12 weeks along I think?) as I don’t think I could handle even a 5 km now with any sort of dignity.  With crossfit, I’ve been reading up a ton on diastasis recti, which although normal and to be expected in pregnancy, can be made worse by certain movements.  As such, sit-ups were out quickly, and other movements like pull-ups (even strict) and handstand push-ups are on the sidelines until after baby comes.  I’m definitely a bit wistful to (what seems like) half-ass my favorite activity – crossfit – but I know it’s not going anywhere and being pregnant is just a phase.  I’m going to keep going as much as I can until baby comes as (A) I love the endorphins and (B) I love the CrossFit Sunalta community beyond words.  Plus due to the physicality of labour, I’d like to be as strong as possible.

Dana and I have both been nesting in our own ways lately.  He’s been busy finishing up our kitchen renovation, and I am definitely getting the urge to put a nursery together.  [Even though many of our friends have said the nursery doesn’t get much use for the first few months…] I’m not super into decorating, and I’m definitely burned out on reno stuff from doing the kitchen, but I do want a room established for the baby with all the basic stuff: crib, glider, etc. 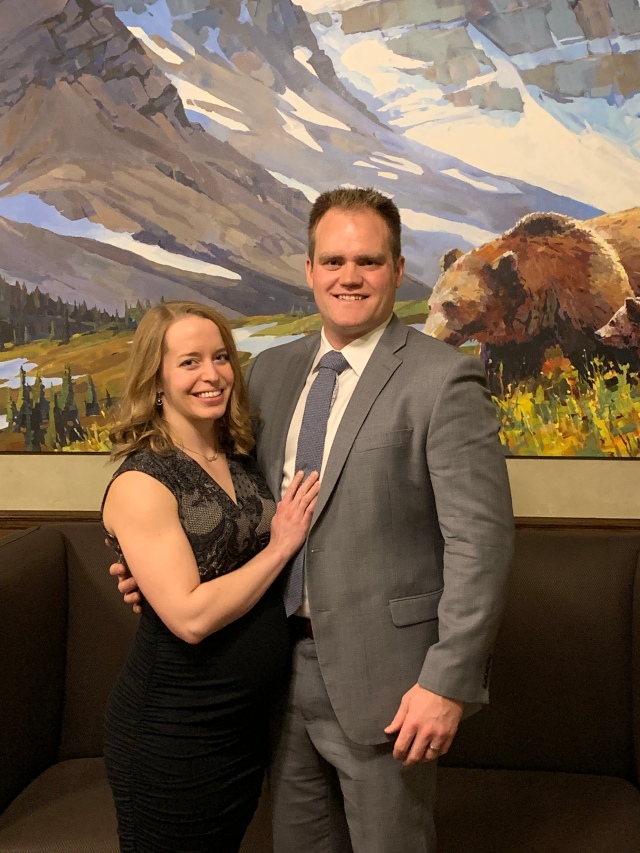 Christmas was really nice this year.  We celebrated with Dana’s family first on actual Christmas, then drove up to Grande Prairie to see my family.  Being in GP made me feel very sentimental as that trip will likely be our last before the baby comes, so next time I’m home will be with our new baby in tow!  I definitely can’t handle the 8 hour drive the more pregnant I get and I doubt it will be fun with a new baby, so thank god for Airmiles. 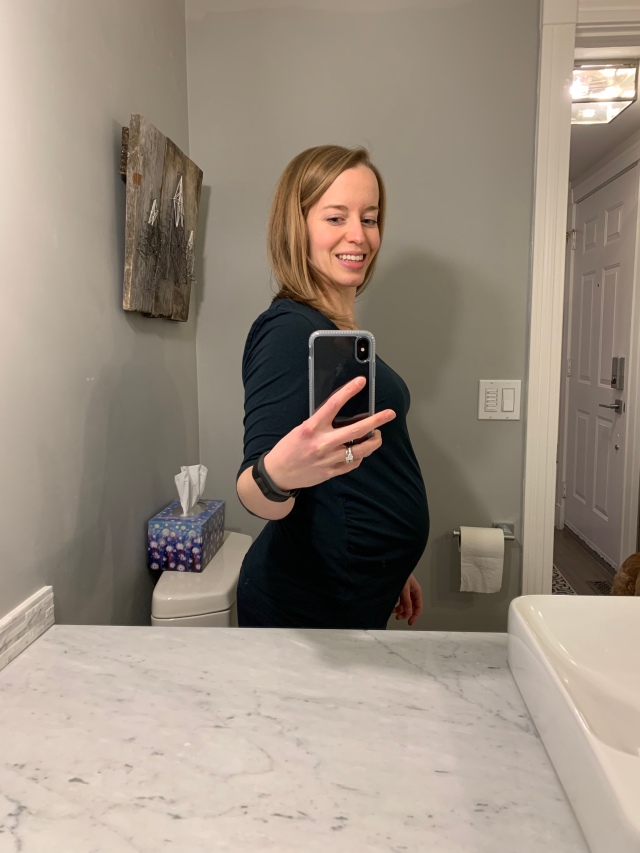 And lastly, in this rambling disconnected post, I just wanted to say how happy I am that we have chosen to go with a midwife team.  I feel empowered and really like the team that was assigned to us.  Dana has sworn we won’t have a home birth, so lucky for both of us the hospital is about a five minute drive from home.  I am coming around on a water birth though – something about it seems so soothing to me as I’ve always loved swimming.

As I am quickly learning, people love to ask a pregnant woman a few questions:

We still don’t know the gender, although it is very fun to speculate and put a names list together.  The old-fashioned pendant test showed a girl.  I think my belly looks like I’m having a boy.  Dana thinks we’re having a girl, although we both flip-flop.

We are definitely not having twins.

Since I’m so very, very type A, I just assumed I would work up until the bitter end.  I know I’ll be prepped well before baby comes, as this is my personality through and through.  Plus, the thought of sitting at home waiting for baby to come on some arbitrary date makes me anxious.  I’m sure a day or two before the due date would be nice, but who’s to say the baby is coming on April 14th?  So I guess my response right now is: TBD.

So with that, I’m signing off.  These baby posts are definitely something I want to look back on so hopefully they aren’t too dull for my general audience.

Mama friends, did you work up until the due date?

Disclaimer: This post may be upsetting for any readers struggling with fertility.  Please skip this post and come back another day if this applies to you.  I whole-heartedly understand how you feel and am sending you big hugs.  As well, for any readers who may find reading about normal human bodily cycles uncomfortable, skip this one!

Well, considering in one of my last posts I told you guys about my PCOS diagnosis and how I was terrified about infertility… turns out, anything is possible.

I am pregnant and Dana and I are overjoyed!

In February, I was diagnosed with polycystic ovarian syndrome (PCOS) and told that having children would be “difficult, but not impossible” without medical assistance by my family doctor, which was then confirmed by a specialist.  I didn’t know a ton about PCOS at that point, and so began my education about PCOS, women’s health, and fertility.  I found the book “Taking Charge of Your Fertility” so incredibly helpful that I returned the library copy and purchased one for my own shelf.  I learned how to track my temperature and cervical fluid, even though with PCOS and irregular cycles, the charting can be exasperatingly erratic.

Conventional medicine typically prescribes birth control to regulate periods for PCOS patients which seemed counter-intuitive to me (I want a baby!).  I was prescribed progesterone to kick-start a period every 90 days which I resorted to once, back in April (I hadn’t had a period prior to that in 14 months).  The specialist also gave me a prescription for Clomid, but I wanted to try el natural first and see if we could conceive without it (I know I’m a hippie).

For anyone “trying” to have a baby, the waiting game is a special kind of difficult.  Especially when your cycles are unpredictable and you aren’t even sure if you are ovulating.  There were lots of tears shed by me.  Dana asked me in mid-July if we were “trying” to have a baby which was, needless to say, upsetting to me as in my mind, we had been trying since February to conceive!  (Men…) Edited to say: Dana would like the general public to know that in his recollection of this conversation, he asked me how hard we were trying to start a family.

On the advice of my therapist and sister-in-law, I started going for acupuncture at the beginning of July.  I figured if all that came of the appointments was a good nap, I’d call it a win.  I saw Dr. Amanda here in Calgary.  We started out with twice-weekly appointments and then went to once a week.  I really liked the appointments and recommend Dr. Amanda 100%.  After about 6 sessions, she prescribed some Chinese herbs to help my ovaries get going since the acupunture still hadn’t kick-started my period.  I took a pregnancy test on July 24th before taking the herbs, but it was negative.  My period didn’t start after the herbs either.  Dr. Amanda referred me to the naturopath at her clinic to see if something else could be done.

When you’re pregnant, the doctor typically maps the due date of the baby off the first date of your last period.  With PCOS, the story is a little different.  For me, that day would be May 20th which would mean I’m much farther along in my pregnancy!  However, I know as of July 24th I wasn’t pregnant yet (or pregnant “enough” to show up on a test.)

Based on my Type A record keeping of body temperature, cervical fluid, symptoms, and possible conception dates, I’m reasonably certain our baby’s birthday will be April 22nd, give or take.  I took two positive pregnancy tests on August 22nd and could barely contain my excitement that day (I waited until Dana got home from work to tell him.)

After taking the tests, I quickly got in to see my family doctor as we were leaving for Italy at the end of August.  She confirmed the pregnancy and sent me for an ultrasound to confirm the baby’s birthday.  The ultrasound gave us a birth date of April 14th so my guesswork wasn’t far off.

My first trimester symptoms were largely: 24/7 nausea/”morning sickness”, which was actually at its worst in the middle of the night.  Exhaustion.  Sinus issues, like a sinus cold for 2 months solid.

So off we headed to Italy, which ended up being pretty good timing for a holiday as I really needed to sleep!  I soaked up the 9 hour sleeps at night and took naps almost every day.  Although working out on holidays used to be a priority, it wasn’t on our Italy trip – I was more interested in (a) sleeping and (b) what my next meal was going to be.  Unfortunately, I started to develop an aversion to tomato-based sauces while we were there which only got worse as the trip went on, and I had fewer and fewer non-Italian food options to eat at meals.  Let’s just say I’m still gagging when I think about pasta or pizza.

As I write this update, I’m now 20 weeks along and getting a bit of a bump.  It’s nice to be getting over the “is she putting on weight or is she pregnant?” phase.  The common phrase people tell me is “well… you used to be so fit.”  Thanks guys. 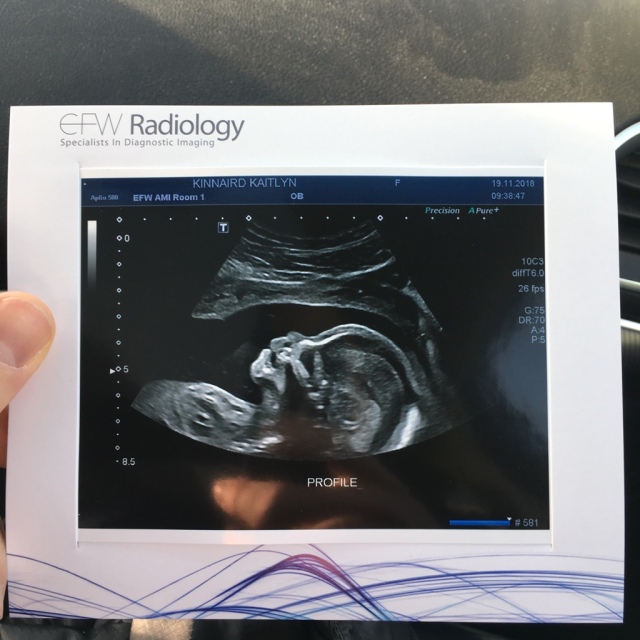 I’m still going to crossfit three times a week, fitting in a bit of yoga, and maybe a weekly 5 km run.  Being active throughout this pregnancy is so important to me, and the research backs me up!  Healthy mama, healthy baby, and hopefully a smoother delivery (here’s hoping right?). 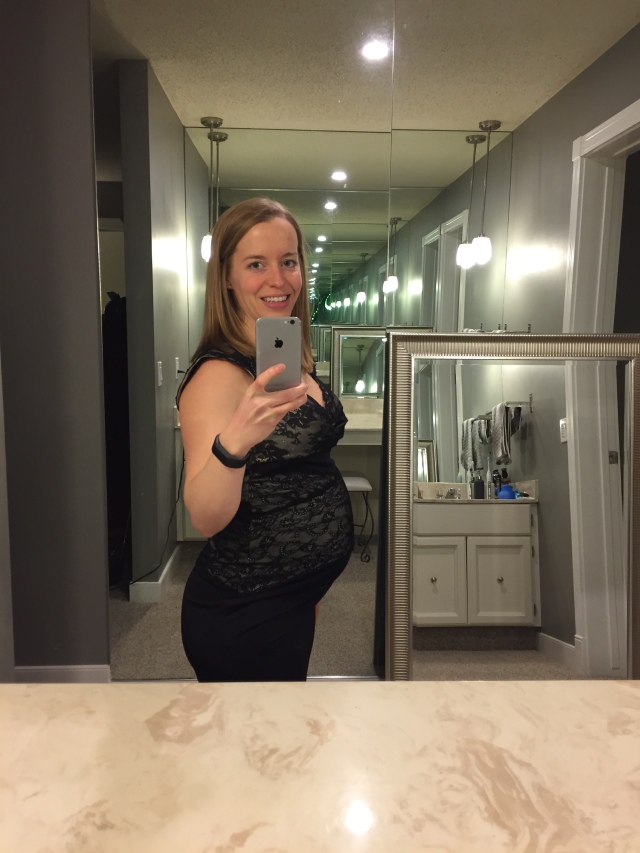 And with that, and 900 words, I’ll sign off.  So glad to share our happy news with you all!

After years of loving fitness/health blogs, I started my own. Crossfit. Yoga. Peanut butter. Happiness. Life with my husband. Adventures around Calgary. Travel.